What is Patapult?
Patapult is a NC Mall game released in the summer of 2014. You play the game by feeding Patamooses and launching them into the air at the temple ruins.

How to Play
Patamoose like to fly through the air and have treasure-hunting adventures in jungle ruins. You can participate by buying a Patapuff snack to feed your Patamoose. 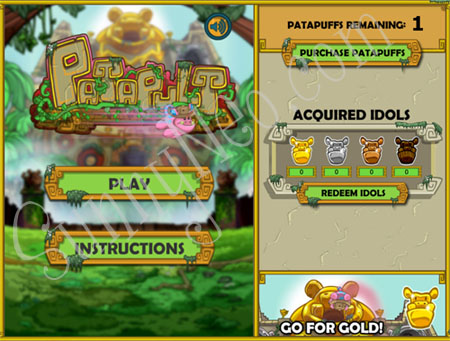 Move the Patamoose with your mouse to aim, launch, and hope for the best! You click on the patamoose, and continue to hold down your mouse button, then drag your mouse to what prize opening you want, and let go. It is best to aim right below the opening of the prize you want. 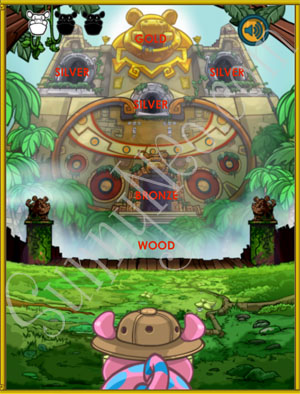 You will have 3 chances to get the tier that you want. On your third try, you will have to keep whatever the color idol is that you landed on. Each idol may be exchanged for a prize by clicking on Redeem Idols at the right. You do not have to redeem each idol as you get it. You can save them up and then redeem all at once.

Prizes
Patapult prizes are done a little differently than other NC Mall games. With each idol that you got from throwing the patamoose, you can then choose the prize you want. So if you have 3 gold idols and 1 silver idol, you can choose the 3 gold prizes, and 1 silver prize that you want. It is not random like other games. The prizes are also different in the way they release them. They usually release new prizes for 2 of the tiers (wood/silver in the autumn) and then the other 2 prize tiers get new prizes a few months later (bronze/gold in the spring). So be sure to check previous year and seasons to see what is ALL currently available.

How do I play Patapult?
To play Patapult, you'll need to feed the Patamoose a Patapuff from the NC Mall. Move the Patamoose with your mouse to aim, launch, and hope for the best. There are four different types of Idols that can be acquired: Gold, Silver, Bronze, and Wood. Launch the Patamoose in an entrance to earn an Idol from that tier. Each Idol may be exchanged for a prize in their respective tiers.

Why can't I play Patapult?
In order to play Patapult, Patapuffs need to be acquired. Even Petpets don't like to work for free ;). Patapuffs are available in 1, 5 and 10 packs in the NC Mall. After purchasing Patapuffs, be sure to activate them to start launching the treasure-hunting Patamoose.

If I decide not to consume my Idol right away, will it disappear?
No, Idols will not disappear but the sooner you collect your prizes the better so you can enjoy them! If you have remaining Idols, you will be able to return to Patapult to redeem your prizes.

Will I earn any Neopoints for playing Patapult?
No, you will only receive the NC item prize that you have selected.

My computer crashed in the middle of my game. Will I be able to continue right where I left off?
Of course! Simply return to the Patapult page. The game will start up again using the same Patapuff you were using before the game ended.

What are Idols and how do I get them?
Idols are the treasures found by the Patamoose when flying through the jungle ruins. There are four different types of Idols that can be acquired: Gold, Silver, Bronze, and Wood. To participate, you'll need to feed the Patamoose a Patapuff from the NC Mall. Move the Patamoose with your mouse to aim, launch, and hope for the best.

Will there ever be more NC prizes released?
Yes, every so often a new set of items will be available. When new items are released, existing items may come down at that time. Don't worry, something tells us all of Neopia will know when that happens ;).

Will I be able to win a bonus NC item prize?
No, there isn't a bonus element in this game.

Will I be able to trade Idols for prizes in a different tier?
No, you can only select prizes for the specific Idol you received during your game.

How many NC items will I get per Patapuffs?
Each Patapuff can be used to play one game of Patapult. During each game you will receive one Idol in which you turn in for one NC item prize.

Can I play Patapult on my side accounts?
Yes, since this is an NC-only game, you can play on your side accounts.