General Info:
To start off, this game is quite easy, and if you follow this guide you will have the avatar within an hour or two at the most. You need a score of 5,000 or more to get the avatar. So why is it so easy? Let's first get into how to play.


How to play:
To play, all that's needed are the arrow keys and the space bar. You guide Dieter the Polarchuck around using the arrow keys, and you use the space bar to eat the snow around him. The controls are that simple. You can see your score, time remaining, lives, and your bloat level on the right side of the screen.

The objective in Snowmuncher is to feed Dieter snow (his favorite meal!) by progressing down screen without getting him bloated. Every time you eat snow Dieter's "bloat level" will increase by 5%. Each snow piece takes one bite to eat, while the bricks you encounter will take 2 bites. You should try to avoid eating the bricks. Only eat bricks when you think that by trying to go around it, you will need to eat more than two normal snow colours (bloat level increase of more than 10%).

There are different colors of snow in Snowmuncher, they are blue, green, pink, and orange (there are more colors, but you probably won't get that far if you're just going for the avatar). Blue, green, and pink are initially available. Orange comes into play after level 2. These are the only colors you will encounter if you follow this guide. When you eat a certain color of snow (ex. green) all the green snows that are attached to it will disappear also, while still only adding 5% bloat to your bloat level. If your bloat level reaches 100% you will lose 1 of your 3 lives. You can also lose a life if snow above you falls on top of you. Lose all 3 and it will be game over, consequently leaving a very unsatisfied Dieter.

So how do you maintain a low bloat level? Well, thanks to the scientific advances in potion technology from the company Bloat-B-Gone, all that you need to do is find red potions throughout each level and run into them, thus lowering your bloat level by 50%. There will be more about what you can find in each level below.

Bonus Points:
There are gems throughout each level in Snowmuncher. Green gems will give you an average of 100 points each time you run into one, while purple ones will give you around 200 each time. You will find green gems throughout every level regularly, but purple gems require a little more work. Say hello to the worm of death! He's frozen right now..but so is the purple gem. These little guys don't start appearing until level 2. You must free the worm in order to get a purple gem, and to do so requires you breaking the snow underneath the worm. But be careful! The worm of death didn't get his name by being docile. Once you set him free he'll be so thankful that he'll want to eat you! If he manages to eat you, you'll lose a life. So it is definitely recommended that you get out of the way, then head back before he can get to you (he moves quite slow, but who wouldn't after being encased in solid ice?) and grabbing that beautiful purple gem. Theres more information about how to best get the gem at Tip 4.

There are other items to be eaten in the game. There are clocks, grapes and eyeballs. These only appear after level 2, and because my strategy to get the avatar score deals mostly with levels 1 and 2, you won't really need to encounter these items. But for the sake of completion, the clock gives you extra time (around 10 seconds on average), the grapes give you a 50 point bonus, and the eyeballs give you a 20 point bonus. All of these items are encased in ice (like the worm) so you can't just run into these to get them, you have to eat them, which adds 5% to your bloat level.

Gameplay:
The basics that you must master are quite easy to learn.

Firstly, you need to learn to read when a group of blocks are going to drop (after munching the foundation), and when they are not. This is probably the hardest thing to master in Snowmuncher, but that isn't saying much. Practice on level 1 as much as you need, until you can plot out your course to get somewhere whilst knowing where and when the blocks around you are going to fall, and when they aren't.

In this screenshot, when you eat the pink snow, the green
snow block will fall, but the blue will not. This is because it
is already stuck to the blue next to it.

Practice manuevering in and out in Snowmuncher. There will be times you need to quickly munch to something, grab it, and get back to where you started before the blocks fall from above you. This can only be done if you're quick enough, and the best way to be quick is to practice moving around.

Munch everywhere. Don't just go for the quickest path down. Moving left and right and munching the sides will improve your score dramatically, so don't rush.

You must try to create "munch combos" as often as you can. Munch combos are created when 4 or more snow pieces of the same color combine. This is by far the best way to accumulate points, and to get a combo isn't very hard. The easiest way is to munch left and right, and let things fall before you move on. This will often create good combos, racking your points up a lot.


Level Guide:
Level 1
Now for the strategy. Start off the first level munching EVERYTHING you can without dying. This is quite an easy level, and many Bloat-B-Gone potions are provided for you to lower your "bloatiness". So as mentioned, eat every single thing you can without dying. You want to end this level with 650+ points, if you have anything below that you really should start over. In fact, this guide REQUIRES you to! Mwahhah! So after you complete level 1 with 650+ points, it's time to be sneaky.

Level 2
The objective in level 2 is to eat as much as you can without completing the level. You want to go for gems (purple ones are now available) and everything else that you can, but again, be very careful with your bloat level. Once you're near the bottom of the level and have accumulated a good amount of points let the time run out, and take the death. You MUST let the time run out to take your death, do NOT just raise your bloat level to make your death go quicker. What this does is reset level 2 for you to munch through again, while saving the points that you earned. You should have around 2,000 points after your first death.

Level 2 (again)
Go through level 2 again exactly the same, earning as many points as you can whilst being careful not to die. When you get to the bottom, die again by letting the time run out. Now, for a check up. You have 1 life left, you're on level 2 and you have somewhere around 3000 points minimum, give or take.

Level 2 (last time, we promise)
Now we're going to go through level 2 for the last time. Same strategy, eat as much as you can while being careful not to become too bloated. This time though, you want to complete the level. Do not die, or you'll have to start over! So after you've munched all you can, end the level and head on to level 3.

Level 3
At the beginning of level 3 you should have around 4000 points. The rest of this strategy is simple. Your only objective is to survive. You should always be careful, do not try for every point you can get. Just survive through the round, and grab anything that's close and worth a lot. Something that must be noted is that you should probably not go for any purple gems from here on out. You could, but remember if you die you start over. If you feel confident enough to get a purple gem, by all means, go for it. Just make sure you can make it to the bottom of the level without getting too bloated.

Level 4
After level 3 you should have 4700 points, give or take. The only thing that is left is to get 300 points. You do not need to complete Level 4, just eat enough to get 300 more points and the avatar is yours! Well done!


Tips:
1. Do not be careless.
This sounds like a normal tip for any game, but the truth is is that you should NEVER rush through any level. Be aware of your time yes, but take your time. Often times you can create big munch 'combos' if you just take a second and look around. In the first level particularly, if you just munch to the left and right after digging down a few rows, chances are the blocks above you to the left and right will fall and give you many more points. Never just shoot through a level unless you're almost out of time. So, do not be careless! 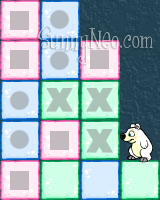 2. Don't be so focused on the gems.
This game is quite easy, the only way you won't be able to get the avatar is if you are too focused on certain items that you come across. Get as many gems as you can, but be more aware of where the Bloat-B-Gone potions are. They are far more important, and you should always be aware of where one is.

3. Be sloppy when you need to be.
Sometimes it's necessary to be sloppy. In the first tip it was mentioned that you should not be careless, and here it says to be sloppy? What the!? In the screenshot below, you'll notice that the potion is too far away from Dieter. If he were to just casually eat everything to get to it, he would die. So what to do? Sometimes in order to survive you must rush through to the potion and then eat directly downward, as illustrated. This is not recommended EVER, and should only be done for a potion. You should only do this when you're low on health and desperate. 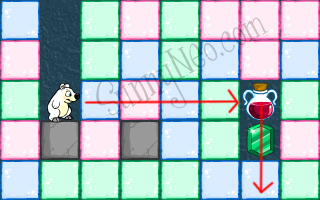 4. Kill the worms in one move.
There is a trick you can use when dealing with the worm of death. Instead of eating just one space below him (when he's encased in ice), eat two, and the result will be that he dies and the gem survives. Note how to accomplish this by studying the screenshot provided. Doing this makes getting that sweet 200 point bonus a lot easier to manage.


Game Codes:
There is a cheat for Snowmuncher. type: 'buuuurrrrrrrrp' to lower Dieter's bloat level by 50%. That's 4 U's, and 8 R's. You shouldn't need to use this until level 3, but if you have to don't be afraid to use it.


Avatar:
Snowmuncher also has an avatar for you to collect.

Score 5,000 or more points at Snowmuncher.