SunnyNeo Customisation Spotlight && Staff Tournament
Posted by jujipup on 17th of June 2019 at 10:29 AM NST

If you haven't already, please take the time out to enter our AC Customisation Spotlight.  Show off your amazing customisations skills and see if your pet can top all the rest! 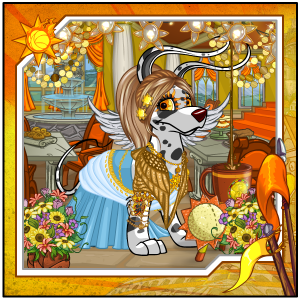 A few of our pets dressed supporting their favorite teams!

The results are in for week two of our SunnyNeo AC Staff Tournament!  Things have shaken up!  Grandma's Candy took last weeks third place in Yooyuball hard and pushed this week in the game.  This extra push allowed them to claim the coveted first place in the main event.  They held strong to their Slushie Slinger first place position.  They also improved their Make Some Noise a bit moving up from third to second while holding their second place spot in Shootout Showdown.  Their commitment in moving their ranks up in two games and holding fast to the other two, lead them to land first place this week!  Way to go, Grandma's Candy!  Into the Sunset only fell to second place.  They lost a little ground on YooyuBall moving from second to third, and falling in their Make Some Noise from last weeks first to third this week!  What really saved the team from falling any further was their claim to first place in Shootout Showdown.  This week Waffle Heroes vowed to not fall in last place overall and improved their scores.  They sacrificed their Yooyuball game to focus their efforts in the side games and it worked!  Last week had them in fourth for Slushie Slinger, and this week they moved up to second.  They went from second to first in Make Some Noise, and from fourth to third in Shootout Showdown.  This extra effort caused Waffle Heroes to tie with Into the Sunset for second place!  Unfortunately, The Hive took a dive this week and the loss stings a little.  They managed to hold some ground in Yooyuball falling from first to second.  However, the side games is what hurt them.  With the extra effort from other teams on the side games, and The Hive's decrease in effort on them, they fell fourth in all three side games.  The Hive is a-buzz with motivation to show they've got what it takes this coming week and their buzz is worse than their sting!

Were you able to increase your effort this last week?